Iskra Delta CEO Vane Janežiè logged off 10 years ago today. The day he vanished, the factories continued to stamp out new machines, employees kept receiving paychecks, the wheels of Iskra's multinational enterprise went on without notice. The only sign of Vane's disappearance was a note left for the secretary that read, "There's more work to do, the Iskra Machine is years ahead, but much remains before full autonomy."

The mystery surrounding Vane absence and Iskra Delta's seeming indifference was punctuated by a final tweet: 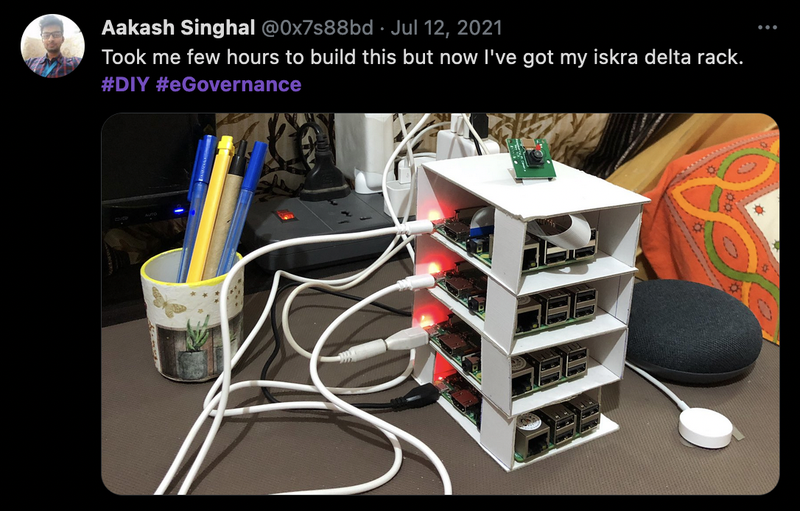 As we remember and celebrate @deltavane on the 10th anniversary of their disappearance, it's great to see the Iskra Delta DIY computer network continue to grow with no company oversight.

We are aware that some Iskra Delta users have been delivered a new modular component, with a message on the attached label: "Iskra Delta Network Activation Card. Please attend the Activation Congress on September 28, 2021."

Other Internet has been contracted to facilitate the Activation Congress. As you are some of the network's oldest participants, we invite you spend the afternoon with us. For network activation to proceed, a consensus on network identity must be reached. Please join us on September 28 to determine the future of the Iskra Delta network as we unravel its multihistories and establish its actual future.

By attending, you agree that Other Internet is not liable for any loss of assets that may occur during or as a direct result of this event.

This is an automated message from Other Internet Network Logistics, please do not reply.

When did Iskra Delta come from? And where along the way did it lose its head? What forces can be harnessed, and what unrealised alliances need to be forged, for these energies to be concentrated towards the creation of alternative, acephalous networks of value and sense-making? What vibes coalesce will in the relentless, evolutionary expansion of capital, the accumulation of energy, the incessant production of time?

Find out with us on September 28, 2021 for a hyperstitional exercise, a forensic investigation of the Iskra Delta brand, exploring its futures, presents and pasts.

Other Internet is a decentralized applied research organization. We study and build social technology.

What is social technology? Social technology is the hardware and software that determine how we organize and collectively live our lives. But it is also the the ideas, knowledge, economics, and institutions that drive culture and sustain societies. And it is the way this knowledge is embedded in the technologies we use.

Other Internet is a group of people building a deep understanding of technologically-driven change. We are developing narratives, initiatives, and software primitives that direct technology toward a future that is more free, fun, peaceful, and equitable. What brings us together is our shared interest in cultivating agency with technology, expanding technology literacy, and enabling our society to adapt to the dramatic technocultural changes of our time.

When building emerging technology, organizations face challenges with no playbook or known solution. These are the problems we are adept at working on. We develop powerful communications strategies where comparisons are impossible, product designs for undefined categories, social policies and interventions in complex governance and community ecosystems. Above all, we consult with people, organizations, and protocols that have a shared vision of the future.

Positive-sum. Meaningful. Just. Join us in building towards a future worth living in.